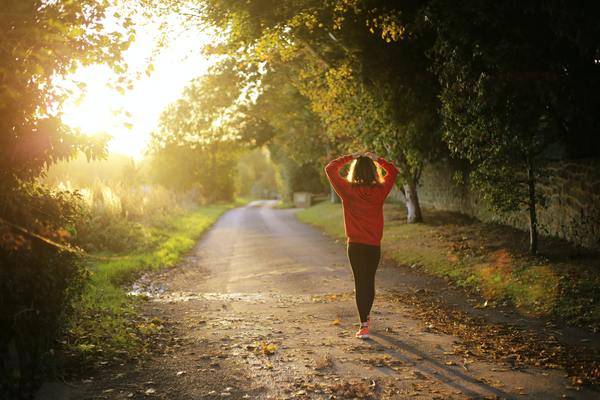 There is no risk of an overdose when taking large amounts of vitamin B-12 such as 1000 mcg, because it is a water-soluble vitamin. Meaning the body will use the amount that it needs then the excess will be excreted through urine.

Vitamins are organic nutrients that are highly essential for maintaining growth, reproduction and various metabolic functions in our body, therefore vitamins are required to be present in our diet.

Vitamin B is a class of water-soluble vitamins consisting of eight members (Vit B1, B2, B3, B5, B6, B7, B9 and B12) which together are referred to as B complex. Vitamin B12 is a vital nutrient required to produce red blood cells, regulate the formation of myelin sheaths that shield the nerve cells of the nervous system and facilitate the synthesis of DNA.

Of note, vitamin B12 helps in the prevention of pernicious anemia, hence, it is otherwise known as “anti-pernicious anemia factor”. Vitamin B12 acts as a cofactor in two enzymes such as methionine synthase and methylmalonyl-coenzyme A mutase, which are critical enzymes in the production of SAMe (or S-adenosyl methionine), hemoglobin and catalytic intermediate by-products involved in fat and protein metabolism.

Vitamin B12 exists in four different forms, 3 bioactive and easily absorbed forms (methylcobalamin, adenosylcobalamin, and hydroxocobalamin) and 1 not so easily absorbed. All of these forms contain cobalt metal atoms and thus collectively are referred to as cobalamins.

Cobalamin consists of a heme-like planar corrin ring structure where four pyrrole nitrogens are coordinated to the central cobalt atom. Methylcobalamin occurs naturally in the body and assists in producing red blood cells, DNA and takes part in other physiologic functions. It is found in injections and oral supplements of vitamin B12.

Adenosylcobalamin, an unstable molecule, exists naturally, is required for energy metabolism, and is hard to find in vitamin B12 supplements.

It is produced by the bacteria present in the digestive tract and is also available in both injectable and oral forms. Hydroxycobalamin is readily converted into the active forms, adenosylcobalamin, and methylcobalamin, inside the body.

Cyanocobalamin is an artificial form of vitamin B12 containing a cyanide molecule that can be converted into the active form, hydroxocobalamin once inside the body, but only by some people.

Cyanocobalamin is cheap and the most common form of B12 found in oral, intramuscular, and intravenous vitamin B12 supplements.

Be Sure to Check Out Our B-12 Collection Below: 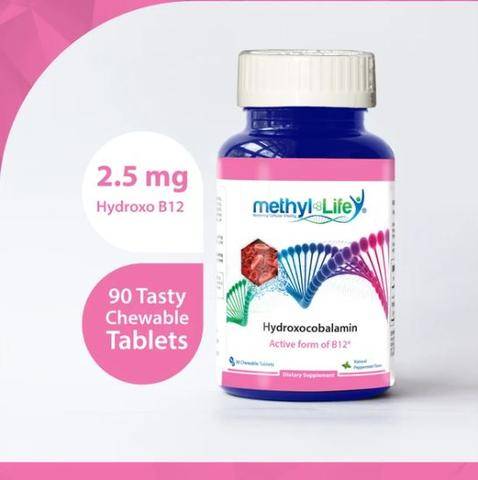 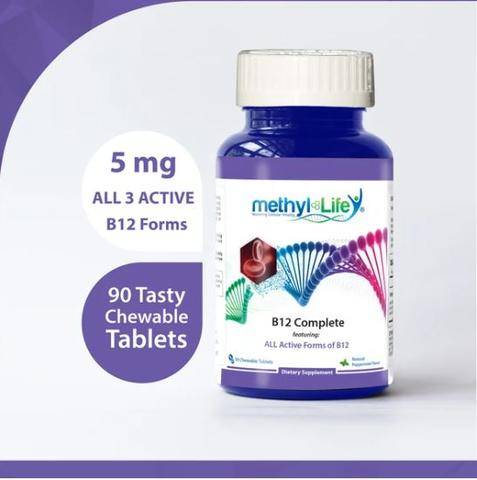 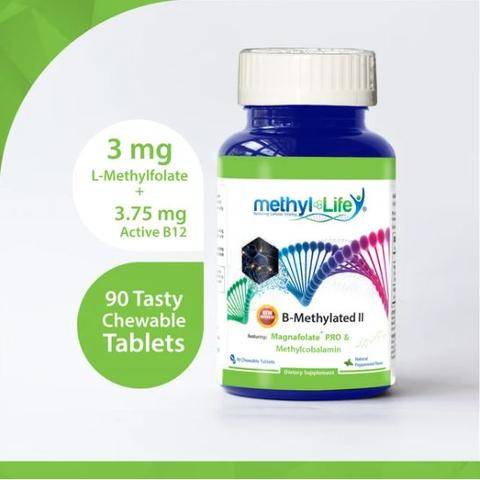 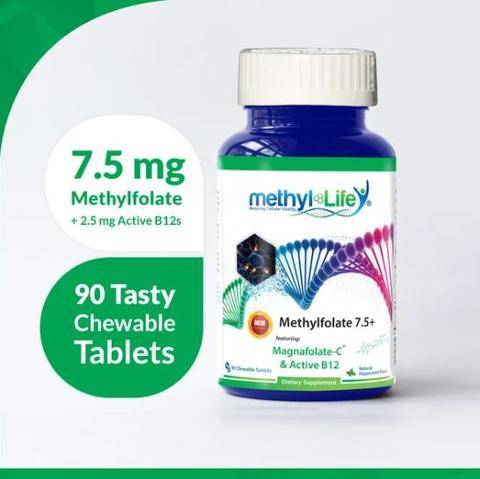 Vitamin B12 is scarcely available in a vegetarian diet. Many bacteria and algae can synthesize cobalamins whereas plants do not absorb cobalamins from the soil and thus, there is little or no vitamin B12 in vegetable sources.

The presence of vitamin B12 is low in milk, dairy and soy products, so they must be consumed in large quantities to meet the daily requirement. Fortified foods are another way to get a source of vitamin B12 into one’s diet (however, it will be almost exclusively in the cyanocobalamin form, which is not well absorbed by most people).

Non-vegetarian foods such as fish, meat, beef, poultry, eggs, liver are all good sources of vitamin B12. The microorganisms present in the intestinal tract of the human body are able to synthesize a little amount of vitamin B12.
The absorption of Vitamin B12 or cobalamin begins with its separation from food protein by the action of hydrochloric acid in the stomach. Haptocorrin, a transcobalamin protein also known as R-binders, is bound to the free cobalamin to protect it from the acidic environment of the stomach.
In the duodenum, haptocorrin is digested by pancreatic proteases and releases cobalamin which in turn gets attached to the intrinsic factor, a glycoprotein secreted by Parietal cells of the gastric mucosa.
The intrinsic factor-cobalamin complex travels up to the distal ileum where it binds to its specific cubilin receptor. Eventually, the complex is internalized and cobalamin is released into the bloodstream by lysosomes.
That’s a long way of saying that there’s quite a bit that has to happen in the ‘gut’ in order for B12 to get absorbed properly by the body.

And if we know anything in this day and age, it’s that a large majority of people have ‘gut dysbiosis’. Therefore, absorbing B12 can be almost impossible through the gut for many (especially for those who have genetic complications as well). This is why doctors recommend oral/sublingual routes with ‘active cobalamins’ – that way the mucous membrane under the tongue is leveraged as one of the most optimal ways to absorb cobalamin.

A healthy individual can actively absorb vitamin B12 through the gut with a limited capacity of approximately 1.5–2 mcg per meal. Approximately 1% of the crystalline form of cobalamin, typically used in cheap cyanocobalamin oral supplements, is absorbed by passive diffusion and its bioavailability remains unaffected by the underlying causes of vitamin B12 deficiency.
People of certain age groups have trouble absorbing vitamin B12. The elderly have insufficient hydrochloric acid secretions in their stomach, patients with pernicious anemia who do not have enough intrinsic factor, persons with gastrointestinal surgery and individuals with digestive disorders like celiac disease and Crohn’s disease can absorb very little or no vitamin B12 from food, not to mention the genetically challenged by MTR and MTRR.
Such persons should get most of their vitamin B12 from one of the 3 active sources of B12 via a sublingual dietary supplement, IV (intravenous) vitamin drip or IM (intramuscular) injections.
Vitamin B12 exists internally in two forms which are important to methylation, methylcobalamin, and 5‑deoxyadenosyl cobalamin. Methylcobalamin acts as a cofactor for the enzyme methionine synthase, which converts homocysteine to methionine (this is important if you have high homocysteine).
The converted methionine is useful for methylation of DNA. Methylmalonyl-coenzyme A mutase enzyme requires 5‑deoxyadenosyl cobalamin as a cofactor for the conversion of l‑methylmalonyl CoA to succinyl CoA, which is an important step for producing energy from proteins and fats. Succinyl CoA is also essential for the production of hemoglobin.
Vitamin B12 is very common but usually left undiagnosed and unfortunately, therefore untreated. The symptoms vary from non-specific clinical features to severe neurological manifestations.
The deficiency of vitamin B12 can cause fatigue, bone marrow suppression, megaloblastic anemia, abnormal erythropoiesis, skin hyperpigmentation, palpitations, glossitis, and infertility.
Chronic deficiency causes progressive demyelination of nerve cells, peripheral neuropathy, areflexia, dementia, and even psychosis in elderly patients. One of the important causes of vitamin B12 deficiency is pernicious anemia where absorption is severely reduced due to the non-availability of the intrinsic factor.

Deficiency during pregnancy may cause neural tube defects, ataxia, hypotonia, and anemia.
Serum total homocysteine and MMA acid levels have been recommended as sensitive indicators of vitamin B12 status in pernicious anemia patients who generally do not possess any significant metabolic complications.
Food and Agriculture Organization of the United Nations and World Health Organization (FAO/WHO) consultation experts on human vitamin and mineral requirements reviewed the recommendations for an estimated average requirement and recommended nutrient intake of vitamin B12 as shown in the table below.

A study has reported the high dose of 2,000 mcg daily oral cyanocobalamin is equal or superior to 1,000 mcg of cyanocobalamin IM injection administered every month for the treatment of vitamin B12 deficiency.

Though with limited evidence for satisfactory haematological and neurological responses in patients with vitamin B12 deficiency, both the studies have shown equal efficacy of oral and IM injections.

It has been proved that 69% of 1,000 mcg IM cyanocobalamin has been recovered in the urine after 72 hours, whereas only 27% is found from the same dose of hydroxocobalamin IM injection.

The natural forms of vitamin B12- methylcobalamin, hydroxocobalamin, and adenosylcobalamin have been commercially available, and are preferred over cyanocobalamin because they are bioidentical forms occurring in human physiology and animal foods.

Methylcobalamin supplementation also resulted in 13% more cobalamin storage in the liver than that of cyanocobalamin.

Another study has also reported lower tissue retention and higher urinary excretion from cyanocobalamin supplements as compared to methyl, hydroxy, and adenosylcobalamin.

Therefore, methylcobalamin is the least costly form of natural B12 available at present in most of the multivitamins and B-complex formulas.

The oral administration of 25 or 100 mcg of cyanocobalamin every day could only lower but did not normalize the MMA (mean methylmalonic acid) levels.

However, 1000 mcg daily dosing of cyanocobalamin was able to normalize the MMA concentrations in patients with pernicious anemia.

Another dose-finding trial study shows that the lowest daily dose of oral cyanocobalamin required to normalize the biochemical markers of mild vitamin B12 deficiency varies from 647-1,032 mcg in the elderly.

This dose is more than 200 times higher than the daily recommended dietary allowance for vitamin B12.

Megaloblastic anemia, a sign of either vitamin B12 and/or folate deficiency can be hidden by the ingestion of a large amount of folic acid, but the progressive damage to the nervous system may continue due to the ‘masked’ vitamin B12 deficiency.

Therefore, more than 1,000 mcg of folate per day is not advisable without the intake of B12 at significant doses. Treatment of vitamin B12 deficiency can be achieved using the different routes of administration (oral, IV or IM injection).
The most effective dose for the oral supplementation of vitamin B12 ranges between 647-1,032 mcg. IM injection of hydroxocobalamin (100-200 mcg) is used for maintenance therapy whereas the usual dose of 30 mcg can be given for 5-10 days.
Some may have access to inhalational B12, 500 mcg of active cobalamin inhaled by nostril once in a week has been recommended. The patients with pernicious anemia have been advised to take 1,000± mcg of vitamin B12 each day as an oral supplement.
Otherwise, 100 mcg IM injection once daily for 6-7 days, later administered every other day for 7 doses and followed by every 3-4 days for around 3 weeks, and finally, 100 mcg IM injection should be taken once every month for a lifetime.

High dosage of vitamin B12:

A dose of 1,000 mcg or more is considered a high dose of vitamin B12, which is about 400% of the daily requirement of 2.4 mcg.
Active absorption of vitamin B12 facilitated by intrinsic factor is limited to 1.5–2 mcg per meal due to the limited capacity of cubilin receptors. An additional 1-3% of vitamin B12 is absorbed by passive diffusion from oral supplements.
Therefore, a single oral dose of 1000 mcg vitamin B12 would provide 2 mcg by active absorption and 10-30 mcg by passive diffusion. High dose of vitamin B12, 1000 mcg per day, is needed only in certain cases demanding increased requirement include
i) As initial therapy for severe vitamin B12 deficiency to replenish the vitamin B12 store in the body;
ii) Persons with a significantly increased requirement such as breastfeeding women, athletes, persons with severe stress;
iii) For persons with malabsorption and diseased conditions, for instance, elderly persons with nerve disorders, mental illness, or gastrointestinal disorder. Such high doses have been used in some nutritional supplements and no side effects have been reported.
There is no risk from an overdose of vitamin B12 because it is a water-soluble vitamin and the excess amount would be excreted through urine.
Such a high dose has no established benefits in persons without malabsorption, genetic complications, pernicious anemia or other contributing factors and would not be necessary.
In summary, vitamin B12 is a vital and safe nutrient required for maintaining various metabolic and growth functions.

In a healthy individual, an oral dose of 250-500 mcg is usually sufficient for the daily requirement and maintenance therapy.
High doses of vitamin B12 (1,000 mcg) is particularly useful in the treatment of pernicious anemia and other vitamin B12 related disorders.