If you’ve heard about the MTHFR mutation—or discovered that you have the variant yourself—you may be wondering what to do next. What are the health risks of MTHFR? What can you do to protect yourself from these risks?

The MTHFR mutation is not uncommon: an estimated 30-40 percent of the American population may have one of the well-known forms of this mutation, including 10%-15% of the Caucasian population and more than 25% of the Latino population.  Most people don’t discover they have the mutation until they experience symptoms caused by deficiencies associated with their variant, which is usually when they get a test.

One of the main questions people ask is, “Should I take multivitamins with MTHFR?” The answer is yes - but not just any old multivitamin off the shelf. There are hundreds of multivitamins out there these days, and they all vary enormously in terms of their quality, and the form of the nutrients they contain. Knowing which is right for you is crucial when it comes to managing an MTHFR polymorphism.

The tricky thing about MTHFR is that symptoms can vary between carriers and variants.

Every person with an MTHFR genetic mutation has different needs depending on their own health history, and also on the MTHFR variant they have. You need to understand what your own specific needs are, and what nutrients you might be deficient in.

There’s a lot of misinformation about MTHFR mutations and how they can be managed. This article will explain what the MTHFR mutation can mean for your long-term health, and why you may need to supplement with certain vitamins. We’ll also explain how to choose a multivitamin that’s suitable for each particular variant of MTHFR.

Are Multivitamins Good for MTHFR?

Yes, multivitamins are the best place to start when managing MTHFR mutations.

One of the first things to understand about the MTHFR enzyme is that it’s involved in an enormous range of biochemical processes in the body. The MTHFR gene provides your body with a set of instructions for making an enzyme called methylenetetrahydrofolate reductase(MTHFR), which is required for breaking down certain nutrients that you ingest.

However, a mutation on the MTHFR gene will affect the breakdown of these nutrients, preventing them from being converted into active vitamins, amino acids, and enzymes that your body can use. It can even affect your body’s levels of certain hormones and neurotransmitters, along with cognitive function, digestion, cholesterol levels, and more.

This can lead to deficiencies that seriously impair normal function, which has significant implications for the way your body works.

The MTHFR mutation can seriously compromise your ability to convert nutrients into a form that your body will be able to use. The most important of these nutrients is vitamin B9, folate.

When you eat foods or take supplements that contain folic acid, the MTHFR enzyme is supposed to convert it into a form that the body can use called methyl-folate or 5-methyltetrahydrofolate. Folate is the primary form of circulating Vitamin B9 in the blood.

But an MTHFR variant seriously compromises your ability to convert folic acid into a form that your body can use, often resulting in a folate deficiency[1] .

This can have serious consequences for your health because adequate levels of folates are essential for homeostasis and reducing the risk of certain diseases. Folate deficiency is associated with several congenital malformations, such as neural tube defects (NTDs), congenital heart defects, orofacial clefts, pregnancy-related complications, cardiovascular diseases, various psychiatric diseases, and cancer.

The MTHFR gene achieves folate conversion via methylation. Methylation is a crucial step in the activation of vitamin B9. The methylation process requires a range of important nutrients, including vitaminB12 and folate. A lack of any particular nutrient can disrupt the methylation process, which can result in an undesirable elevation in homocysteine levels and a buildup of other toxins.

Another important process is there-methylation of homocysteine to methionine, a substance the body needs for proper metabolism and muscle growth. Methionine is converted to S-adenosylmethionine (SAMe) which serves as a methyl donor in many other reactions throughout the cellular system. The methionine-homocysteine pathway also creates a host of important nutrients which play a part in various other biochemical reactions such as detoxification, healthy immune function, the formation of connective tissues, as well as brain and cardiovascular function. 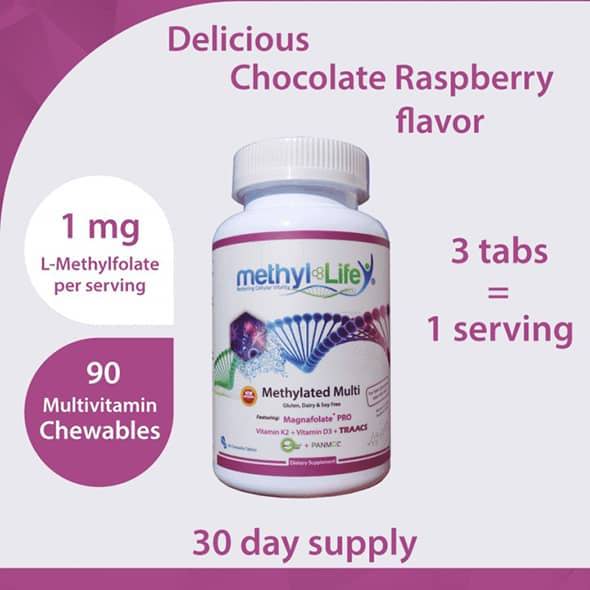 An MTHFR variant can mean that your body is missing out on many vital nutrients, which is why taking a comprehensive multivitamin is so important.

Not just any multivitamin will do. Those with an MTHFR polymorphism(s) are advised to supplement with nutrients that are already in their bioactive form, especially l-methylfolate. This means the nutrient will be instantly available to the body without the need for further breakdown. Your most effective source of nutrients for optimal health is a multi that contains a methylated B complex.

A good option is Methyl-Life’s® Methylated Multivitamin, which provides many of the needed ingredients for methylation to occur optimally in the body. It’s been specially formulated with L-Methylfolate and Active B12 to assist with the biochemical processes required for overall wellbeing.

The formula is designed to support the myelin sheath for nerve health, promote glutathione (your body’s most valuable antioxidant), and boost serotonin, an important neurotransmitter required for a healthy mood.

The Methylated Multivitamin also helps to reduce harmful homocysteine levels in the body, which is a major risk factor with the MTHFR polymorphism. It can also be used during preconception and pregnancy to support fertility and prenatal health. Ask your doctor about this.

It’s important to know that folic acid and folate are NOT the same molecule. Folic acid is a synthetic form of folate, while folate is the form that your body can use in circulation. For this reason, it’s also important for those who have MTHFR and/or are pregnant to avoid supplements or foods that contain folic acid.

Only the active form 5-methyltetrahydrofolate can participate in the gene activation and DNA repair, as well as supporting rapid cell growth, regulation, and division.

These have been created by a team of natural health experts and used successfully by hundreds of people all over the world. They contain the purest, stable, and most potent of the four world’s industry-leading, patented L-Methylfolates, Magnafolate® PRO.

Pyridoxal 5'-phosphate (P5P) is also necessary for the recycling of homocysteine. It facilitates the breakdown of homocysteine to cysteine and then to taurine.

P5P is involved in the body's production of hemoglobin. It is also involved in supporting the healthy formation of the myelin sheath that surrounds and protects nerve cells.

B12 plays a major role as a cofactor in the methylation process of L-methylfolate, as well as the conversion of homocysteine to methionine.

Vitamin B12 is crucial for proper brain development and is associated with the one-carbon metabolism required for transmethylation reactions. It’s also involved in the formation of S-adenosylmethionine (SAMe). Supplementation with a highly bioavailable form of vitamin B12 is the most efficient way to optimize levels quickly.

Magnesium is an essential mineral and also a cofactor for the COMT enzyme, which is required for the manufacturing of dopamine, norepinephrine, and epinephrine. Alongside the B vitamins, magnesium is vital in supporting a healthy mood, cardiovascular function, and nerve function.

NAC is a precursor for glutathione, which has potent antioxidant and anti-inflammatory properties. Researchers have described NAC as a neuroprotective nutrient, and recommend combining it with L-5-Methylenetetrahydrofolate, methyl B12, and betaine(or TMG) for helping to reduce homocysteine.

Methylfolate promotes glutathione in the body, so those with MTHFR mutations who are low in methylfolate are also likely to be low on glutathione.

Glutathione is a powerful antioxidant that serves as a precursor for a reaction in the methylation/folate cycle. It neutralizes free radicals, helps make DNA, supports immune function, and enhances the effect of other antioxidants including vitamin C, E, and lipoic acid.

Glutathione’s sulfur groups aid heavy metal detoxification by adhering to these toxic compounds and moving them out of the body. It also protects vitamin B-12 from reacting with toxins and being unable to perform its metabolic tasks.

Folate is required for proper DNA replication and the prevention of neural tube defects. It’s especially important during the first few weeks of a fetus' development, which is often before a woman discovers she’s pregnant. Folate deficiency during this time can lead to serious, lifelong birth defects in the baby's brain or spine.

Other recommendations include a high-quality, purified DHA and EPA supplement. These two fatty acids are crucial for a baby’s brain and nervous system development.  DHA also helps reduce the risk of developing postpartum mood disorders.

Probiotics help to reduce levels of harmful bacterial strains and yeast in the gut, which can increase systemic inflammation and upset hormonal balance; two factors that can reduce fertility.

While the two most-studied variants of the MTHFR mutation both have certain health risks, these risks differ slightly. This can mean that management may vary depending on which type you have.

Some data suggests that people with two copies of the 677TT mutation, as well as people who have one copy of both mutations have increased health risks.

The MTHFR variants C677T and MTR A2756G have been shown to independently increase the risk of elevated homocysteine levels. 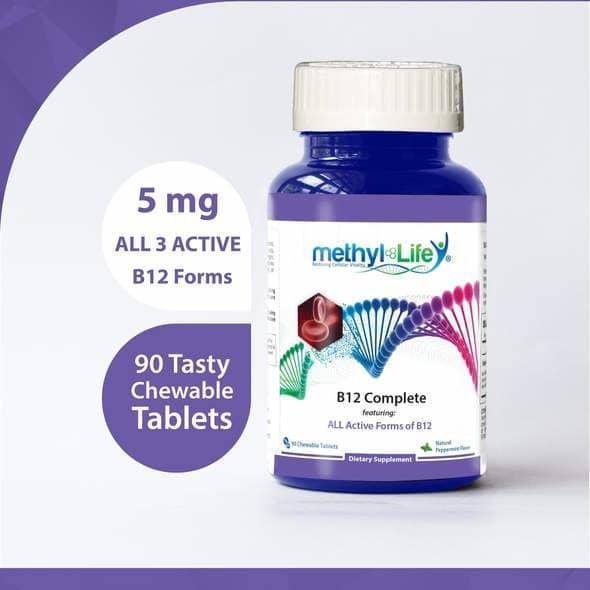 However, another study found the A1298Cpolymorphism may be a predictor of colon cancer risk. They also found that the risk of colon cancer reduced with higher intakes of folate, vitamin B2, B6, B12, and methionine among women with the MTHFR677CC/1298AA genotypes.

The C677T has been shown to clearly affect enzyme function and has also been associated with increased homocysteine levels and poor folate status.

Further research has found that plasma homocysteine decreases as vitamin B-12 concentration increases in people who were heterozygous for both the C677T and A1298C variants. This indicates that increasing B12 status may help to significantly decrease homocysteine in people with C677T and/or A1298C MTHFR polymorphisms.

An MTHFR polymorphism may have implications for health risks, but these risks can be managed by taking a specialized multivitamin.

Even with a healthy diet, your body’s inability to properly convert folic acid means that your need for supplementation is much greater. It also means that supplemented nutrients must be provided in a methylated form to allow for optimal uptake and utilization.

Methyl-Life® products contain the most bioactive nutrient form of B-vitamins and other nutrients available. They contain the form of folate that has already been converted, so it can be immediately used by the body’s cells. The Chewable Methylated Multivitamin also contains a range of nutrients specifically designed for optimizing methylation and supporting overall wellbeing in those with C677T and/or A1298C MTHFR polymorphisms.